"Adequately prepared for Arctic conditions": what is the special feature of the latest Russian heavy all-terrain vehicle KamAZ-6355 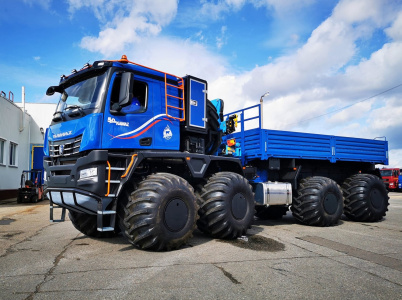 In the near future, Yamal will start testing a prototype of the heavy all-terrain vehicle KamAZ-6355 ("Arctic") with a wheel formula of 8×8. This was reported to RT by the chief specialist of the scientific and technical center of PJSC "KamAZ" Damir Faizrakhmanov. The car is capable of transporting up to 15-16 tons of cargo on the polar off-road, snow drifts and swamps. According to the developer, today in the Russian Federation there is practically no wheeled platform that can carry loads of more than 10 tons in the harsh conditions of the Arctic. According to experts, Russian designers have implemented many technical solutions to adapt the KamAZ-6355 for operation in high latitudes.

In the summer of 2021, tests of the prototype of the heavy domestic all-terrain vehicle KamAZ-6355 ("Arctic") with a wheel formula of 8×8 will start in the Yamalo-Nenets Autonomous District. This was stated in an interview with RT by the chief specialist of the scientific and technical center of PJSC "KamAZ" Damir Faizrakhmanov.

"This year we plan to test the car (KamAZ-6355. - RT) in Yamal. Prior to this, the prototype was successfully tested at the site of the STC (Scientific and Technical Center. - RT) "KAMAZ" in Naberezhnye Chelny, " said Fayzrakhmanov.