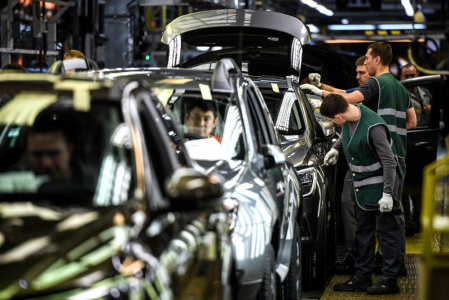 Exports of Russian automotive products continue to grow, despite all the problems caused by the pandemic. And this applies not only to passenger cars, but also trucks and components. "RG" understood what the market's future prospects were.

"In five months, Russia has delivered abroad more than 35 thousand cars worth $ 575 million, which is 60 percent more than in the same period of 2020," said Veronika Nikishina, general director of the Russian Export Center.

She made this statement at the Kaluga plant "PSMA Rus", when new projects of the Stellantis concern were launched. The brand with this name has become one of the largest players in the global car market this year. And Kaluga is an export hub.

From here, minibuses, vans and compact cars under the brands Fiat, Peugeot, Citroen and Opel, as well as engines will go to Europe, Africa and Latin America. The first deliveries will begin in the second half of 2021.
The Kaluga Region has long been one of Russia's leaders in the export of automotive products. And this is not the only example. In the Yaroslavl, Voronezh and Kirov regions, they can boast of success in exporting Cordiant and Pirelli tires. Yaroslavl residents, for example, have already organized deliveries to 19 countries. According to the plans, by 2024, the volume of deliveries of the Kaluga autocluster will reach $ 250 million.

This is provided for by the national project "International Cooperation and Export".

For enterprises focused on working abroad, within the framework of the national project, exporters receive subsidies, participate in educational programs, and are helped to enter new markets.

"It is impossible to compete without state support," Oleg Afanasyev, the official representative of KAMAZ PJSC, told RG. "Competitive and national barriers are often introduced in export markets." Today, the company's sales geography is extensive-from the CIS countries to Vietnam.the rear guards, which Oleg Afanasyev spoke about, are far from a bonal figure of speech. Thus, the cars of the GAZ Group are delivered to 40 countries of the world. Electric trucks and vans work in the road and utility services of Germany. Minibuses transport residents and tourists in Vietnam and the Philippines. Ambulances are helping to fight Covid in Egypt. Off-road vehicles are fighting fires in the forests of Eastern Europe. However, the GAZ Group is included in the US sanctions list. And this is what the company calls a systemic obstacle. "The volume of our exports without sanctions was twice as much, "the auto giant told RG.
Experts are sure that Russian exports in the automotive industry have a lot to grow further.

Two factors contribute to its development, says Andrey Olkhovsky, General Director of Avtodom Group: "Firstly, production facilities and their proximity to European countries at lower prices for materials and labor than in the EU. And secondly, the development of integration processes in the Eurasian Economic Union, which create new production chains."

Another factor, says the head of the Group of Companies "Avtospeccenter" Andrey Terlyukevich, is the availability of spare capacity. They open up opportunities to increase production with an eye to export. "But in order to dramatically increase the number of suppliers, state support will be required," the expert says. " This applies to the localization of international automakers, and to an increase in the share of our cars on the world market."