Bearing EPK will change the owner 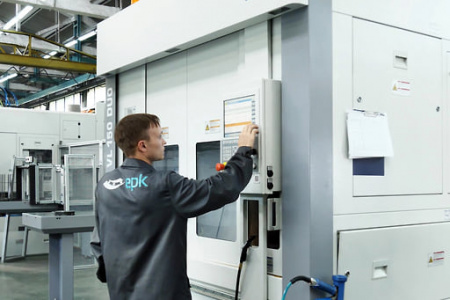 The FAS granted the request of an unnamed buyer to acquire a 56.8% stake in EPK JSC, a holding company, the service said. EPK is the largest Russian manufacturer of bearings (plants in Volzhsky, Saratov, Samara, Kazakhstan Stepnogorsk) for the automotive, railway, aviation, machine-building industries both for the Russian market and for export. EPK mainly produces roller bearings from railway bearings. But the company also owns the manufacturer of cassette bearings, the EPK-Brenko joint venture with the American Amsted Rail. The Unified State Register of Legal Entities indicates two founders of EPK JSC - Hong Kong Mate Corporational Limited and British Exmor Limited with 6.4% and 4.3%, respectively. Beneficiaries - Oleg Savchenko and Chairman of the Board of the Company Alexander Moskalenko.

A Kommersant source familiar with the situation in the company assures that there is no external buyer, the deal is of an internal corporate nature: one of the shareholders transfers the business to his son.

According to Mikhail Burmistrov, head of Infoline-Analytics, EPC is worth at least 18 billion rubles.

The bearings were the subject of a high-profile technical dispute between the market and agencies in 2019. Based on the greater reliability and service life of the cassette bearings, the Ministry of Transport proposed, in a directive manner, from 2021 to re-equip all freight cars in the Russian Federation with them, banning the use of roller cars. Cassette bearings, with which only innovative cars are equipped today (about 14% of the fleet), are much more expensive than roller bearings, are produced in limited quantities by three manufacturers and are not localized.

Operators were strongly opposed and estimated their additional costs at 200-300 billion rubles. Despite this, the decision to transfer was made at the level of the Council for Railway Transport and approved by the order of the Ministry of Transport. But on October 31, 2019, the then Deputy Prime Ministers Maxim Akimov and Dmitry Kozak canceled the transition.

Kommersant's sources admit that the movement towards their replacement has not stopped, especially taking into account the strategic plans of the Federal Freight Company to re-equip the standard fleet.

“I think that the stress scenario of transferring to cassette in the current economic situation will not be realized,” believes the deputy general director of IPEM Vladimir Savchuk. “And if there is a decision, the transition will be very smooth and long-lasting.” According to him, the need for bearings today is not so great due to the drop in the production of new cars.

In an interview with RZD-TV, Alexander Moskalenko said that, according to the company's estimates, the Russian rail transportation market will not grow in the medium term, but YPC hopes to compensate for the shortfall in volumes on the domestic market through exports to Europe. But export, in the opinion of Vladimir Savchuk, also does not represent serious prospects, since it is difficult to find volumes comparable to the Russian car building industry.