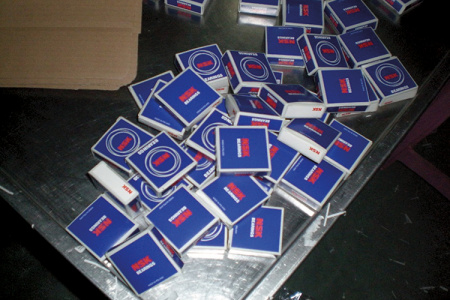 The case has been referred to the customs department for further consideration. China Customs reminds that in accordance with the relevant laws and regulations, persons transporting contraband bearings will be prosecuted in accordance with local law.

More counterfeit bearings were seized on 22 March 2020 in Kursk, Russia. According to the Central Customs Administration of Russia, the Swedish manufacturer SKF has asked the Russian customs to check the Kursk distribution network for bearings illegally marked with the SKF trademark. The bearing manufacturer received a large number of complaints about the quality of the products sold in the city.

After the release of goods, the Department for the Protection of Intellectual Property Rights and customs officials checked outlets for the presence of goods imported into the territory of the Eurasian Economic Union (EAEU) in violation of customs regulations. In the course of the inspection, about 1000 different SKF-marked bearings were found at two points of sale. Individual entrepreneurs engaged in sales did not have documents confirming the origin of goods and the legality of their import into the EAEU, as well as permission from the copyright holder to use this trademark. The bearings were withdrawn from circulation and sent for research for the presence of intellectual property items included in the Customs Register of Intellectual Property Items.

SKF has verified the authenticity of the product. The results of the research showed that all the presented products are counterfeit, that is, these bearings were not produced in any of the SKF factories. The SKF mark has been illegally applied to products without the permission of the copyright holder. Neither the copyright holder nor the owner of the trademark license entered into any agreements with Kursk entrepreneurs on the use of this trademark. At the same time, the fake bearings had very low performance and did not meet SKF standards. Their use in equipment units designed to work with original bearings can lead to equipment failure and harm human health and the environment.

According to SKF, due to illegal use of the trademark, more than 83 thousand rubles were damaged. The copyright holder applied to the customs with a request to bring entrepreneurs to administrative responsibility for the illegal use of the SKF trademark, as well as to withdraw counterfeit products from circulation and destroy them.

After the completion of the check, all materials were transferred to the subordinate department of Rospotrebnadzor in the Kursk region for drawing up a protocol on an administrative offense under Part 1 of Art. 14.10 Administrative Code of the Russian Federation (Illegal use of a trademark). The sanction of the article provides for punishment: the imposition of an administrative fine on the offender in the amount of 50 to 200 thousand rubles with confiscation of products.

On the occasion of the 19th World Intellectual Property Day, which is celebrated annually on April 26, 2020, the Chinese customs have carried out several actions related to counterfeit bearings.

On April 25, Dalian Customs destroyed over 5,000 counterfeit goods, including KOYO, NTN, ZWZ, and several other fake brands known both domestically and abroad. Since 2017, the Dalian City Customs has dealt with 47 counterfeit bearing cases and confiscated over 45,000 items, including bearings.